Leicestershire’s 20 board U11 team (10 of whom are U9) pulled off a remarkable 2nd place in the EPSCA Northern Zonal on the 17th March behind the victors Warwickshire shading the Midland U11 champions Notts into 3rd place on tie break. In so doing they comfortably qualify for the National final which takes  place in Birmingham on the Sat 21st April. 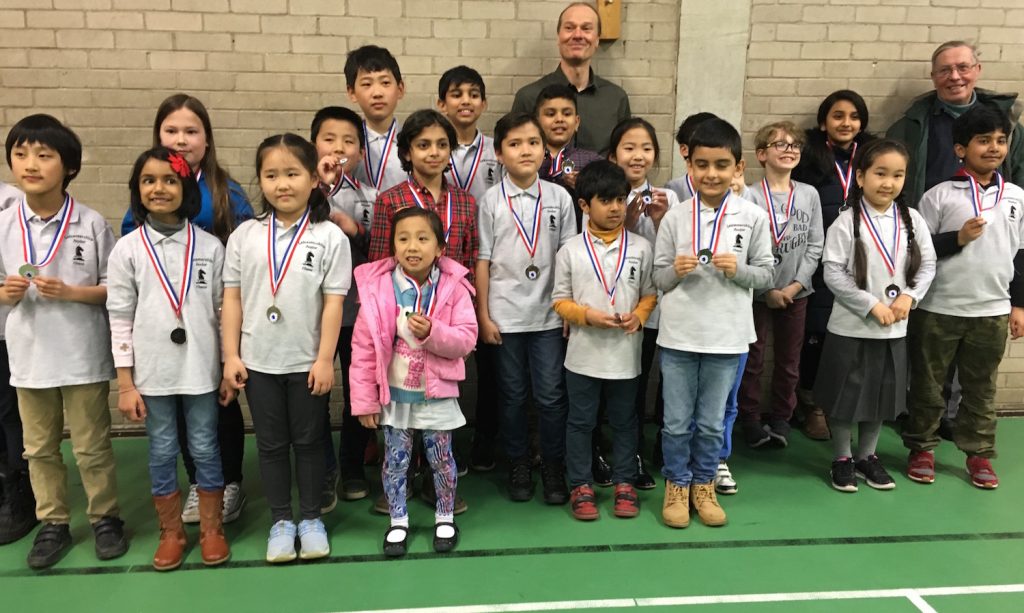 Just over a month ago the U11 team had finished 4th behind Notts (25), Warks (20) and Northants (14.5) on 12.5 pts in the Midland Competition. However without an U9 competition taking place at the same time Leicestershire were able to strengthen the U11 team with it’s talented and improving U9s and this proved to be a decisive factor in the marked improvement in the team’s performance.

After the first round (of 3), Leicestershire lay in 3rd place on 11.5pts but behind the front runners and favourites Warks & Notts (both on 14pts). In the 2nd round Warks scored another impressive 14 pts (out of 20) to open up a 3 point lead over Notts who this time only scored 11pts to Leicestershire’s 11.5, shortening the gap between 2nd and 3rd (25 to 23). At this stage Leicestershire looked secure in 3rd having a 3.5pt lead over Cheshire & North Wales in 4th, but overhauling a 2pt lead on Notts for 2nd place in the last round seemed a big ask.

In round 3 Leicestershire saved the best till last improving to 13.5pts for the round (constituting 12 wins and 3 draws with only 5 losses over the 20 boards) and Notts faltered dropping to only 10.5 pts for the round. The result was a tie for 2nd between Notts and Leicestershire on 36.5 pts which had to go to the 2nd tiebreak (progressive elimination of lowest board scores) before Leicestershire were pronounced the silver medallists.

Rakym Serik (board 2), Jason Lv (board 4) and Olivia Chen (bd 14) won all 3 games and Umar Syed (bd 3), Evan Miles (bd 11) and Sophie Mehta (reserves) were also unbeaten on 2.5 pts. The well known ability of our most experienced and highly graded players was clearly on display with 11.5 points scored by our top 5 boards, but every 1/2 point is vital in such events and significantly in this one everyone scored points for the team.