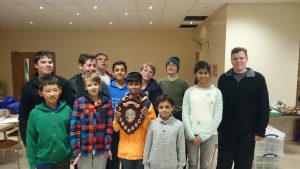 After coming close last April, Leicestershire Juniors finally won the 3rd staging of the 4 Counties Juniors U130 Competition at Nottingham High School between Yorks, Notts, Lincs and Leicestershire by winning all three matches. The first round saw a narrow win over our nearest geographical rivals Notts 6½ – 5½ over the 12 boards. With two games remaining we were trailing by a point but both Max Miller and Matthew Lo won tense games under time pressure to complete a thrilling reverse in fortunes. Round two was against Yorkshire, the winner of the two previous editions of this competition. Our top 5 boards found it tough going against higher graded opposition we obtained just 1 point out of 5 courtesy of two hard fought draws from our top two boards (Max Miller and Ben Raine). Fortunately we proved to have better success on the lower boards and with wins from team debutant Thomas Blay, Joseph Ward-Langman and our two youngest team members Umar Syed and Jason LV (both aged 9) we pulled it back to dead level. Milly Kotecha, perhaps thankfully unaware of the match position given the potential added pressure, then won a very close final game in play to bring another tight 6½ – 5½ victory as in the first round.

Leicestershire went into the final round with 4 match points with Lincs and Yorks in 2nd place with two. As such, a draw in the final match would have sufficed. Things started well with brisk victories from Peter Mottram-Epson and Joseph followed by further wins from Rory Haywood, George Worrow-Goodin and Matthew such that with four matches to finish and 5½ points on the board it initially looked like plain sailing. Needing just another half point to secure the title however, it suddenly didn’t look such a forgone conclusion as we were down in two games and the other two were close. Finally after a long fifteen minutes or so, a draw from Milly took us to the all important 6 points before Rakshai Muthusamy’s draw and Alastair Mottram-Epson’s win in the final game ensured a comfortable match victory 7½ – 4½ and a clean sweep of match wins.