Leicestershire 2nd in 4 Counties U130 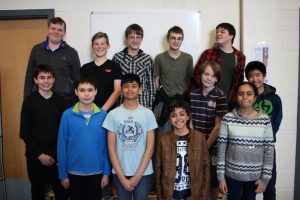 Leicestershire hosted the twice yearly 4 Counties U130 U18 competition between Yorks, Notts, Lincs and Leics at Leicester Grammar School on the 26th March. Having won the competition at Notts High School back in November the Leicestershire team had something to live up to and gave a spirited if ultimately unsuccessful defence of their title by finishing 2nd. Leicestershire played Notts and Lincs in the first two rounds and won both matches relatively comfortably, 8-4 and 10-2. Meanwhile Yorkshire also won the first two rounds even more convincingly meaning that Leicestershire would need to beat Yorkshire in the final round to win the competition. In the event Yorkshire, who were still fielding 75-80 calibre players on boards 11 and 12 and outgraded us comfortably on boards 1-4, proved just too strong and beat Leicestershire 8.5 – 3.5. Although the result was never really in doubt for Yorkshire, a couple of late reverses in the last games to finish made their margin of victory seem a little more flattering than it felt at the time. Every member of the team achieved at least one win over the three rounds and there were outstanding performances from Matthew Lo and Thomas Blay (3 wins out of 3) and Anika Khare and Sasha Kerbel (2 wins and a draw).

The full team was: