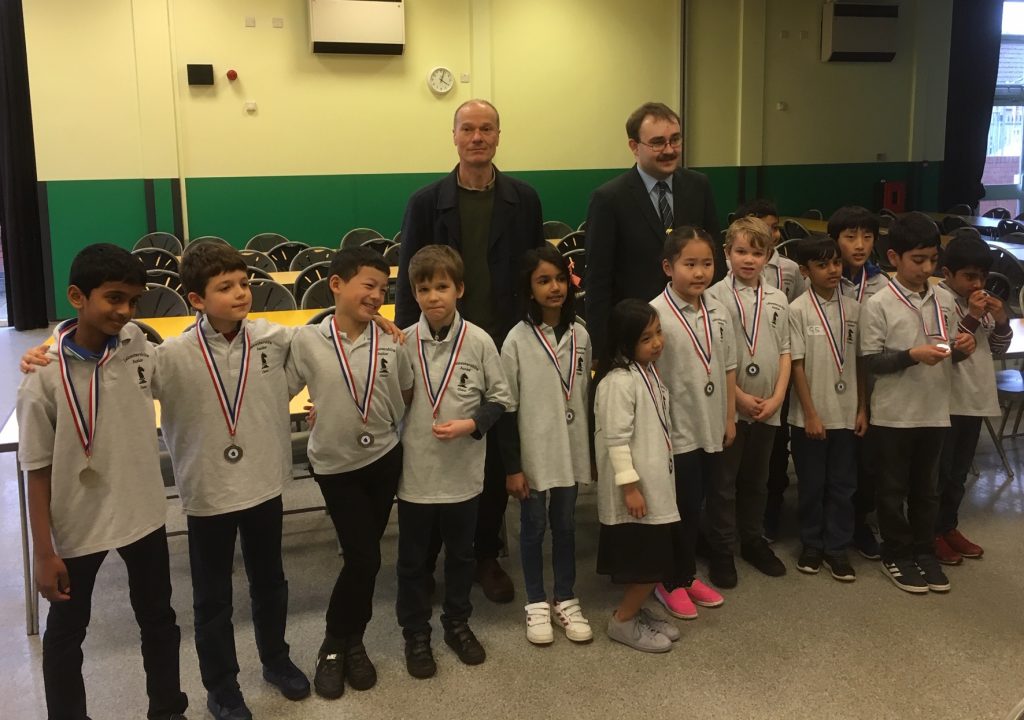 A full strength Leicestershire U9 team travelled to Liverpool on Sat 16th March and qualified for the National Final in some style finishing just 1 pt behind last year’s national U9 medallists Warwickshire.

Leicestershire got off to a flying start in round 1 recording 9 wins and 2 draws from 12 boards to lead by half a point from Warks and Notts. The second round went a little less well but still resulted in 8 wins to keep Leics 1/2 a point ahead of Notts but ominously Warks scored an impressive 11 points go 2.5 pts in front of Leics. At this point with the top 3 teams more than 6 points ahead of the 4th placed team, it was clear Leicestershire would win medals but of what colour?

Round 3 started badly with a couple of quick losses but thereafter, win followed win until the team had netted another 10 points from the 12 games. As in round 1 Leicestershire had outscored all their other rivals, but in the final overall scores fell just one point short of Warks in 1st place with Notts 2 points back in 3rd place. Five Leicestershire players (Joshua Tang, Olivia Chen, Arooj Mahajan, Catherine Lv and Arav Ajaykumar) scored an impressive 3 wins out of 3 and it’s interesting to note the contribution of the 3 girls in the team (Olivia, Catherine and Sophie Mehta) who had not played in the U9s in the Midland Team champs (where the U9s finished 3rd) due to being on U11 Girls team duty that day who scored a massive 8.5/9pts between them. That said, this was above all a team performance where everyone played their part and was only made possible by multiple wins almost across the board.